General discussion about RuneAudio. Do not post any support or feature requests here.
Post a reply
4 posts • Page 1 of 1

Welcome to the club: Randy Jackson's solo debut is bass-infusive & all-inclusive
"PLAYING BASS IS MY CORE," SAYS Randy Jackson, mindful that his chief notoriety is as a judge alongside Paula Abdul and Simon Cowell on TV's American Idol. However, dig this dawg's bass pedigree: Housebroken as a pup by Chuck Rainey, groomed among the greats of '70s fusion, unleashed as a first-call session bassist on loads of '80s and '90s radio hits, road-dog with Journey and Mariah Carey. But then there's that whole other side, the unique perspective Jackson has gained as a producer extraordinaire and all-around music impresario. When it comes to music, Randy has the insight and experience to navigate the twisting path between art and business.
See Also: best car speakers, best car speaker in the world
Now we have Randy Jackson's Music Club, Vol. 1, his solo debut. The album is filled with first-rate songs expressed by a dazzling array of artists from across the board and cast in the sonic hues of Randy's considerable imagination. Where else can you find Abdul's dance-single return, a crunk track, and such imaginative groupings as Sam Moore, Keb' Mo, and Angie Stone, or Travis Tritt, Richie Sambora, and Lucy Woodward? Jackson holds it down on about half the tracks, but his grasp of how the bass functions throughout is a unifying thread--a lesson in song-serving, and a wink at those of us hip enough to hear subtly brilliant bass playing. "I'm blessed by the way all the ingredients came together," Jackson allows. 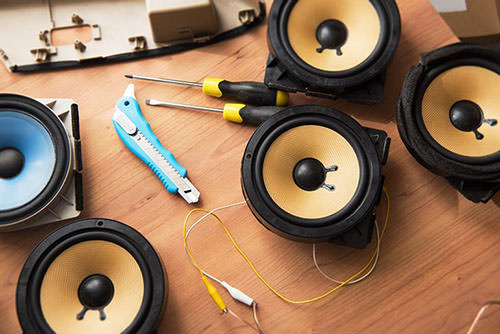 Randall Darius Jackson was born in the rich musical broth of Baton Rouge, Louisiana, on June 23, 1956. Inspired by his older brother Herman, a drummer, Randy tried drums, guitar, bass, piano, and sax. At 14 he returned to bass, after watching local group Big Bo Melvin & the Nighthawks rehearse on the porch of bassist Sammy Thorton. "Sammy turned me on my head," Randy recalls. "He was an incredible player, just a natural in the Jamerson/Rainey style." Jackson began lessons with Thorton, and he took up upright bass in his school orchestra and stage band after hearing Stanley Clarke on Return To Forever's Light as a Feather album. A young prodigy, Randy gigged with jazztrios, Jimi Hendrix and Led Zeppelin-inspired rock bands, and all-city orchestras, occasionally encountering the Marsalis family in local music competitions. Through a high school scholarship, he traveled to Los Angeles to study with Rainey. Upon graduating, he attended Southern University in his hometown, under the tutelage of noted jazz reedman Alvin Batiste.
While visiting Southern U. for a clinic, drummer Billy Cobham snared Jackson and Batiste for his road band and two subsequent albums. Randy moved on to Jean-Luc Ponty's group before tiring of fusion and relocating to L.A. in the early '80s to pursue a session bass career. With his ability to play multiple instruments--and his producing and writing skills--Jackson was soon in demand, playing on hundreds of albums between Los Angeles, New York, and Narada Michael Walden's San Francisco studios. As he moved away from hired-hand status and assumed more artistic control in the '90s, Jackson took a big step, becoming a vice president of A&R for Columbia and then Senior V.P. of A&R for MCA. In 2002, his agent lined him up with the producers of the debuting American Idol. Now in his seventh season as a judge on the program, Randy also manages artists, and he just launched Randy Jackson Presents: America's Dance Crew, an MTV competition show that he executive produces but doesn't appear on.
With so much on his plate, Jackson admits he wasn't at first overly keen on putting out a solo album, but he saw it as a way to launch his new label, Dream Merchant 21, and indulge his undying passion for music.
WHAT WAS THE CONCEPT FOR YOUR CD DEBUT?

The model is Quincy Jones; I've always loved his albums, like The Dude and Back on the Block, and all the styles and artists he would feature and introduce. This was a chance for me to have fun with friends and break some new artists. I felt, if I was ever going to make a record, I didn't need to make one of me noodling on the bass; there are a bunch of folks out there who do that extremely well. So I thought, what kind of record could I make that I'd want to listen to? I love all kinds of music: pop, R&B, rock, blues, jazz, gospel, country, so this has something for everyone--it's like a great radio station with no format restrictions.
Related Article: What are The Speaker Sizes in My Car | Speaker Size for My Car
What was your starting point?
Songs. I got a collection of really good songs. As I always say, I'm a song guy: I think Steve Wonder said it best, songs are the key to life. To me, songs are a big part of what helps transfer emotions from one human to the next. On [Weather Report's] "A Remark You Made," Jaco is playing his face off, but it's also a beautiful song. On my CD there's an autobiographical element, too, in that I touch on the styles I've encountered in my career, starting with "Wang Dang Doodle," which is a Willie Dixon song I grew up with in Louisiana.

What's your general bass approach on the disc?
Often when I'm producing I don't play a lot of bass. It allows me to separate myself from the bass role and having to figure out a part. Instead I can look over all the parts and make sure everything is dancing well together. So I played on maybe six songs, and I brought in my friends Paul Bushnell and Cornelius Mims. I use them on a lot of records I make because they're more than great bassists--they're songwriters themselves, and they listen to the music in the same way I do. There's also some sequenced bass, keyboard bass played by Obi of Danish production team DEEKAY, a track played by guitarist/producer John Shanks. I played some keyboard bass and guitar, too. My whole approach was always, what does the song need? If the answer was nothing, I left it alone.
Your bass style is evident on "What Am I So Afraid Of," "Who's Gonna Love You Now," and "Real Love."
"Afraid" is me with Abe Laboriel Jr. on drums pounding it out live. As much as possible, I tried to get a live rhythm-section sound. I used my Mike Lull 4-string tuned down--pretty much every bass I have is tuned down a half- or whole-step, especially the 4'S. "Who's Gonna Love You Now" is my semi-hollow Yamaha, which has two big humbuckers in it. I went for a dub kind of sound because the track has an underlying reggae feel. "Real Love" is programmed but sauced up with a bit of old school. I played my '61 P-Bass with flatwounds, tuned down a whole-step. I love flatwounds; about half my basses have flat or tapewound strings. I also added keyboard bass on all of those tracks.
Your overall bass sounds ale deeper than before.
It's a combination of the sound of bass changing over time and the everything-old-is-new again factor. In the fusion era and in '80s pop and dance music, the bass was midrangey and front and center. Then hip-hop hit and the drums became the dominant instrument and low-end presence, leading bass lines to become simpler. But the cool thing now is bass is back in the sub area and it's coming on strong, like in the crunk music of the South. It's not just the drums rattling the speakers in cars and clubs anymore, it's the bass again. So all of that has influenced my bass approach. At the same time, I'm always trying to stay ahead of the curve, looking to what might be next. And right now my old P-Bass with flatwounds is a lot of where I'm at; in the right context, it can be really fresh.
Has being able to play so many different developing styles over the years resulted in any new techniques?
Read more: What are the best car speakers
Not really. I still pluck with my two fingers alternating; I slap conventionally--though not as much anymore. I use a pick where needed, and I pluck with my thumb or thumb and index finger while palm-muting. It's more the tones and concepts that have changed.
One exception sonically and conceptually is Herbie Hancock's "Maiden Voyage," which is obviously a nod to your fusion roots.
I've always loved the song, and I wanted to do a fresh take on the kind of long suites that were popular in fusion. I had an idea for a sort of trip-hop arrangement using a loop plus Narada Michael Walden on drums. It also has L. Shankar on violin and the opening narration, Christian Scott on trumpet, Kenneth Crouch on piano, and Kristen Chenoweth doing operatic vocals. Bass-wise, I wanted to cut loose and get all my influences in there: Stanley Clarke, Jaco, Alphonso Johnson, Larry Graham, Bootsy Collins. I used my Modulus 5.
Last edited by adrienne2242 on 20 Jul 2018, 02:41, edited 4 times in total.

Hi, I'm doing a multi room audio project for school (it's a Capstone project and the deadline for the first draft is on Friday): the idea is to have music in 2 rooms running on two different Raspberry Pi's. I found an older topic here (Multi room capabilities with Snapcast), but don't know what to start with.

Edit: should I also install a Snapclient on RPI?

I have also a small room and want to run SnapCast on two different Raspberry Pi but I am unable to start. By the way, your thread is in-depth and worth reading.