hi again, connected my P1FI DAC 1.0 board
to my RPI3, this DAC board uses PCM5102A and is hifiberry compatible
at least that is the settings i always been using, with my old PI1 and rune 0.3
it plays.. so it must be connected correctly (GPIO21=data GPIO19=FS GPIO18=clock)
The problem is random audio clicks, simulates quite well dust particles on a vinyl record

what can be done to solve this ??
I had same problem with PI1 and rune 0.3

PS: another problem : the left time dial, dont react to my input, it moves fine when music play
and it move when I react with mouse, but when I lift mouse, the time hop back to live play,
like it ignores my commands.
EDIT : this problem only apply to WAV files.. time dial react normal with mp3 files !!
Last edited by TommyBoy on 26 Apr 2016, 23:49, edited 2 times in total.

Try playing some test files, that usually helps me to find the limits of whatever hardware I am using at the time. Here are some example from audiocheck:

At the bottom of the page there are some small (30-second) test files at different sample rates. They are small enough so you can download them to your SD card and play them from your local SD card or USB flash drive, and narrow down what the problem may be.

(put Rune Audio on "Repeat" in the Playback SCRN, so you can let them run for a few minutes each)

the random clicks happens due to limited timing margin,
I started to measure the clock data latch signals using a fast digital scope,
while playing music at the same time,
when I put the probe on the clock signal the clicks happen much more often !!
a probe on clock delays the signal a few nano secs, and then the timing is much more critical.
best solution : fix the timing to be more margin perfect, will help all I2S users with click issues

until then, I simply add a few pF on data and latch, so they are delayed a nano bit,
same thing as speed the clock a bit forward for me

How long are the connecting wires?

under one inch, and the issue was exactly the same with this DAC board, mounted directly on top of my old PI,
so I know I did not add any futher timing issues.
the margin is simply too little from the beginning,
i plan to pick up a better scope tomorrow, then I be happy do tell you exactly how much the clock is too slow
i just need to figure out how to attach pictures. 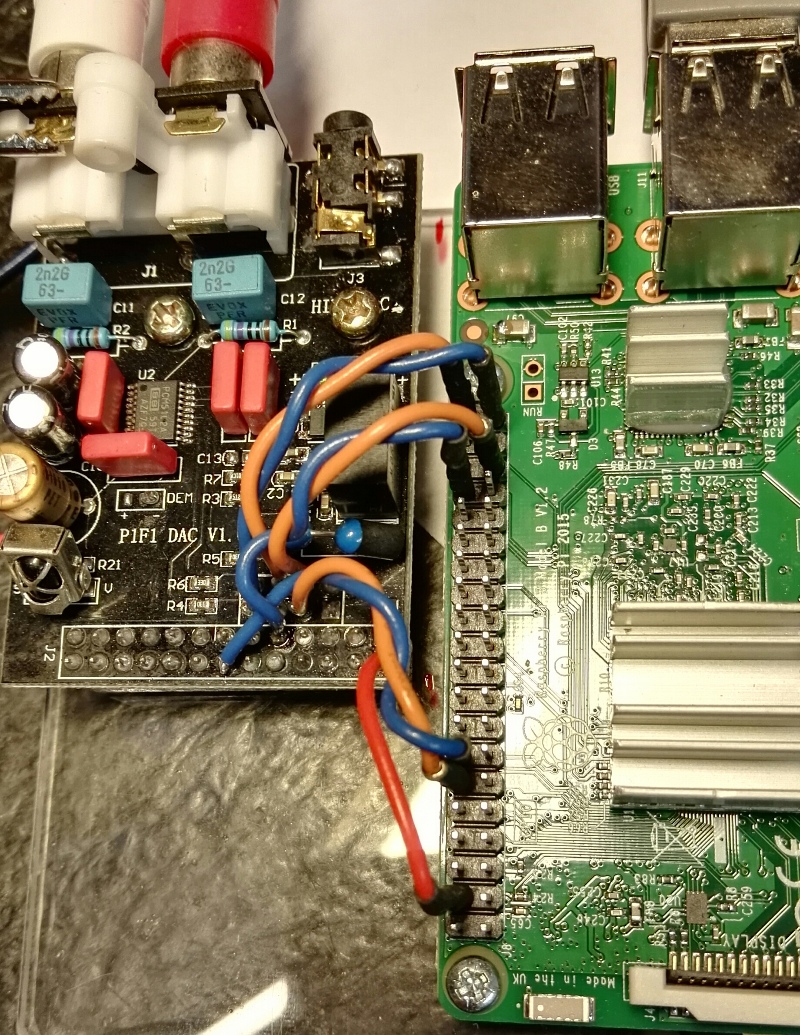 the more I measure on the 3 signals, clock, data, latch
i get more and more confused :
clock demand only one thing : rise times under 20nS, I got 10nS even loaded with a scope.
clock latches data at rising edge, so it makes perfect sense to change data at every falling edge, exactly what rune does.
the latch left/right signal changes at falling edges exactly where data dont care a thing,
so why is the DAC so ultra hysteric ?? add anyting capasitive load to the clock signal and sound get tons of clicks !
I can add 1nF to the latch signal, or even the data signal, no effect on sound, actually the clicks are gone, with just one 1nF cap
on the latch signal, I just cant understand, WHY..

this reveal timing is a problem, removing the cap, and I get the "normal" seldom random clicks back,
changed the value to 100pF and now the clicks are gone with 88kHz 32bit mode, and even also DSD
Last edited by TommyBoy on 26 Apr 2016, 22:44, edited 1 time in total.

i'm sure that this is not a general I2S issue with RuneAudio.

I also did some scoping a few weeks ago.

The signals are exectly as they should. The data gets latched on the rising edge of the clock signal.
This happens exactly in the middle of each data bit.

I would search the issue in my environment.
BTW: I never had pops or clicks with my Hifiberry DACs (DAC and DAC+)

hi Frank cool you get back to me,
if your hifiberry is open and avail for a little test ?
can you add a 100pF cap to clock ? and all is still perfect ?

PS: I did complain, about my DAC board, they sound like they finally agree to send me a new one,
what IF !! lets say it is defective ??

PPS: the noise on data, in phase with clock rise, what if they are accepted as wrong values now and then ?
maybe a good idea to add a little filter cap on data near dac, to keep the data value nice and stable,
while clock changes.
Last edited by TommyBoy on 26 Apr 2016, 23:44, edited 1 time in total.

PROBLEM FOUND AND SOLVED
READ BELOW:

many P1FI and similar DAC boards use a little 10 by 5 mm switchmode module
it is called mornsun B0505S
the circuit : it takes in 5V and make 5V again, now with tons of hispeed ripple, then a little sot23 3.3V regulator works overtime
to make a usefull supply for the dac, the ground from PI is broken hi-frequency wise with a ferite bead called R8 on pifi 1.00
this means the ripple currents from the switchmode converter, generate voltages peaks over the ferite,
and since this is ground split, it is perfectly the same as adding this 1V noise directly to clock data latch signals !!
The solution :
brake off the mornsun converter, burn it, blow it up, what ever you feel like, (i am not going to say fully here what I plan to do with mine)
once removed, under it you find pads for shorting in and out, pin 2 and 4,
then short the ferite bead, or remove it, add a short wire, now enjoy perfect stable audio !
and see your DAC board got a perfect clean VCC and also nothing is added to the clock data latch signals.
and more cool, you can poke arroind with clock data latch as much as you like now, it will not harm audio
since perfect margin is restored.
OMG what a terrible day.. good it is over now..
Last edited by TommyBoy on 26 Apr 2016, 23:48, edited 1 time in total.