This below photo using wifi hotspot direct connected between phone and Rune. 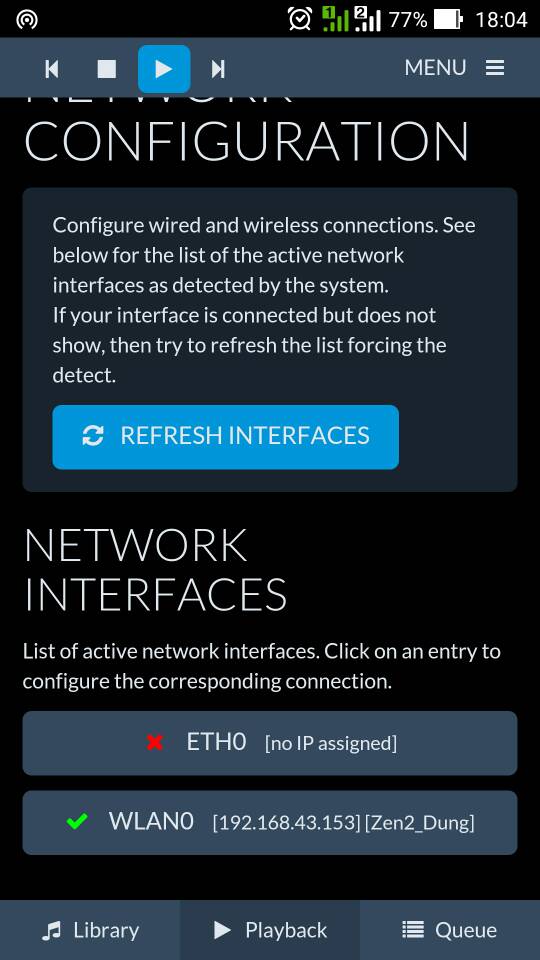 2) if you consider the Bluetooth for streaming music from phone to Rune? This is useless since Bluetooth is able only stream the audio up to CD quality (16/44.1) by AptX profile. The devices have AptX profile are quite less rather the ones are more popular with A2DP profile (equal to mp3). Rune plays audio files up to 24/192 higher than CD much. Finally, Rune project is the phone (controller) and RPi/Rune(player) ...no need anything else to make high-res audio. For conclusion, you should not compete Rune team with Bluetooth

Sometimes I want to listen something from youtube or other web service. Easyest way to do it is to find what I want on my cellphone/tablet and stream audio to RuneAudio server via Bluetooth. Sound quality is not a issue here, it is better to listen music in lower quality than listen nothing, even in highhest bitrate

@flega: for your case the best way is using your own phone. I don't think the way we enjoy the video clip on the phone and the audio from a speakers few meters far, it seems overlapping here. For YouTube and other web based services we could use miracast in this case, if your phone does not have this you could try with Chrome cast of Google's where is your phone is the controller for the Chrome cast to be player should be the right way.

many times I use youtube for listening music which I don't have in my collection, without looking at video.
Example for Buetooth #2: sometimes my friends came to me and want to play music stored in his/her phone. Instead of plugging USB cable and copying music to my computer and than open it from Rune library, playing music directly from friends phone via bluetooth is simpler and faster. Especially if you don't have computer near me.
#3: party. Every one can play music from his phone directly to rune.
#4: can play games with audio on big speakers
Low cost audio for everyday use: Raspberry Pi 2 -> USB sound card ->preamp+Low-pass Filter NE5532 ->2x TDA7492 amp -> 2 fullrange speakers + 1 bass speaker.

@flega: I got what you need. You should buy a Bluetooth receiver the one with A2DP profile (for stereo music) it has 3.5mm audio out to connect to 1 input amp should be the best way for your case.

Doing this anytime you need just use the amp remote to switch it on to select the input of Bluetooth receiver... very convenient

It's a quick (and dirty) way to listen when my friends come around hyped about something and want to share. Now Pi3 comes with Bluetooth I do not even have to purchase additional hardware as long as the software is compliant!

I've decided to try to get something going with regards bluetooth. I wasn't expecting it to be so hard to get the Rpi 3 bluetooth card recognised on Arch, but now at least I have that working. hcitool seems broken in that it runs, but no commands can be entered, that's my next stumbling block. After that, I think I can get it running with exception of figuring out how to get it to integrate into MPD's 'listening' choices, someone will have to help with that. For me this is less important, I'm really just basing it on Rune to utilise the good work on existing audio quality tweaks.

My situation is that I'm going to put this all in behind my Car Stereo as it is old and due to complications costing NZ$1,000 to replace, I can't justify it when I could just throw a Rpi in there. It's an Alfa and needs a line in. I don't want some third party crappy sounding bluetooth adapter in there I want something with a decent audio line out.

I run android, so WiFi / Airplay won't work in most audio apps unless I root my phone (which I am not interested in doing), google cast doesn't appear to have library's available to integrate into rune (which would be my preference - maybe someone can prove otherwise), DLNA doesn't work in many applications either, so I'm left with Bluetooth. Bluetooth is the only universal audio output that works on virtually all hardware and brands. All person's can generally use it.

With a decent add on board, the Raspberry Pi has the potential to be the best sounding bluetooth audio output stage a car would virtually ever have.

Anyone have any time to help? I mostly need to understand MPD I guess.

I just did a quick article on how to enable the bluetooth module in rune / arch. Link below if anyone is interested.

It get's the module working, but it is not yet connected to anything.

Raspberry Pi 3 has built in bluetooth and this seems like a good use case if Runeaudio already supports airplay.

@marshalleq - I might be tempted to have a go at your suggested procedure, but, would I have to go through all that again as and when a new version of Arch/Rune is released?